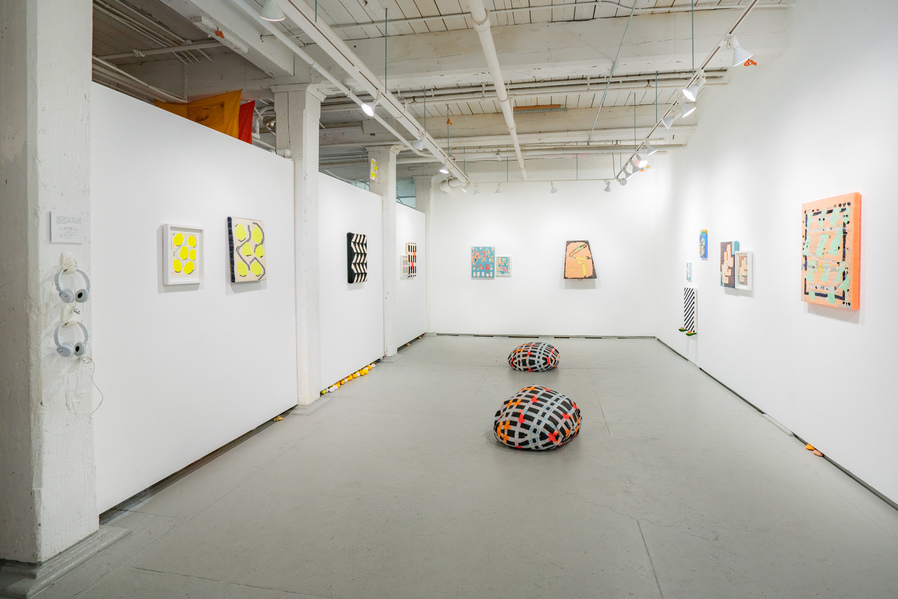 FAMILIEN IGLESIAS: LOOPS AT A SPOOL
2018

Las Hermanas Iglesias = the collaboration between Lisa and Janelle Iglesias.
Familien Iglesias = Norwegian for "The Iglesias Family," a name that foregrounds our intergenerational collaboration with our mother and our child/nephew.

Over the past ten years of our collective art practice we have worked formally and informally with our mother Bodhild. For our project at Ortega y Gasset, we further expanded this familial cooperation, actively including Lisa’s son, Bowie, in the development and creation of LOOPS AT A SPOOL. The exhibition features a dialogic call and response between the four family members, across 3 generations and multiple mediums.

LOOPS AT A SPOOL features works on paper, created by Las Hermanas Iglesias, alongside textile counterparts that function as visual translations, knit by Bodhild. As the matriarch of the Norwegian-Dominican family, Bodhild has long played the role as translator, the only member who speaks Norwegian, Spanish and English fluently. Growing up in rural Norway, Bodhild cultivated a deep intimacy with knitting and other textile traditions such as weaving and embroidery, techniques she now instrumentalizes as translational processes.

While childhood has been imagined as the most fearlessly creative time in one’s life, children are often regarded as a major distraction to a professional, critical practice. Eschewing this notion as well as the tradition of the solitary (and usually male) cultural producer, Familien Iglesias is interested in exploring and celebrating the ways in which the multiple members influence, distract, reshape and finish each other’s aesthetic sentences. Like the palindromic title suggests, the works in LOOPS AT A SPOOL are motivated by a rhythmic back and forth dialogue, a sense of play and an exploration of how ideas translate between different materials, laying bare the commonalities and glitches between objects and phenomena.
Loading...